“For the past 2 days I’ve been getting reports of a large loose non native lizard called a Tegu roaming the streets of Folsom. Christina Sullivan and myself conducted a search this morning. We searched the area’s that the 4 foot long lizard had been seen. We covered a wide area and even found an abandon reptile aquarium that was in very close proximity of all the tegu sightings. It’s unknown if the large exotic lizard escaped its confinement or was illegally released or dumped. Tegu lizards are a large powerful species that can have a bite force of over 1,000 Newtons, a measurement calculation that is equal to a large breed dog bite. Also named after Sir Isaac Newton. The non native Tegu lizards are active during the day and can be very detrimental to our native wildlife. They can eat eggs and small animals. The State of Florida is experiencing an explosion of non native species that are negatively affecting their native wildlife. With the help of Christine Sullivan, DeAnn Wren and Folsom Animal Control, the large lizard was finally caught in a neighbors backyard today. Temporary housing will be made for a mandatory stray holding period so a possible owner can be found. This rescue is a victory for our native wildlife  by removing it from the wild population.”

“Tegu lizards are a large powerful species that can have a bite force of over 1,000 Newtons, a measurement calculation that is equal to a large breed dog bite.” 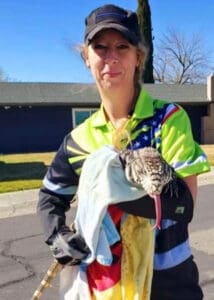